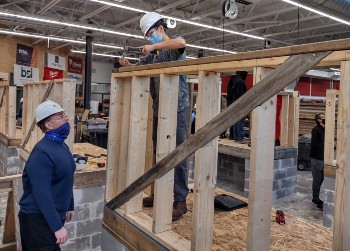 Craig Griffie is the technical education teacher at Wauwatosa East and was the same at Brown Deer for 6 years before that, but he still has students build a freestanding bathroom in the school’s shop that is taken apart at the end of the project. Each trade is taught by Griffie alongside local tradespeople in the order of construction, from the cinderblock foundation on up.

“[Mr. Griffie’s class] kickstarted my career,” says Joe Kutz of his technical education program. Now a registered apprentice carpenter with Waukesha-based Building Services, Inc. (BSI), Joe really liked the hands-on program at Brown Deer “because as a kid, you were only allowed to watch as somebody showed you.”

The Wauwatosa East program is a strand of LAUNCH, which provides project-based learning with a professional slant. Instead of the traditional one-on-one student placement outside the school, LAUNCH places a mentor with teams of three to five students inside the school. In the case of Wauwatosa East, a local tradesperson may be rotating among four or five teams.

“Having professional tradespeople in the room brings the program to life,” Griffie adds. Plus, many more students are able to participate.

“There’s a critical labor shortage,” says Griffie, who views himself as a workforce development person. “I want to find a way to train students so that they are fully prepared to enter a registered apprenticeship.”

In pursuit of his goal, Griffie applied to have his program endorsed by the North Central States Regional Council of Carpenters as a Certified Pre-Apprenticeship Program. It is the only such program at the high school level that has earned the distinction. Students who complete the certification get a 500-hour credit toward the union’s 7,000-hour registered apprenticeship. 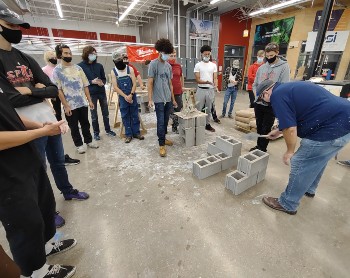 Griffie is the first to admit, “This model is hard to do. It requires years of networking and years of partnering with local tradespeople and industry. The important thing is the school needs to find an industry, not just one company but a trade association, like the National Association of the Remodeling Industry (NARI), Associated Builders and Contractors (ABC), or trade unions.”

Why would teachers or schools want to adopt this way of delivering work-based learning? “It’s the best thing for students,” says Griffie.