MADISON — More students took more tests with better results. This is how Wisconsin’s 2017 graduates participated and performed in the Advanced Placement (AP) program according to the “AP Cohort Data Report: Graduating Class of 2017” from the College Board.

“It’s heartening to see an increasing number of our students leaving high school with proven college and career readiness,” said State Superintendent Tony Evers. “The Advanced Placement program is one opportunity for our kids to experience the rigor of college-level coursework and, through examination, gain credits or advanced standing that boosts their chances for postsecondary success.”

The AP program is made up of 38 courses, the newest being AP Computer Science Principles. Wisconsin had 125 of its 2017 graduates who took that end-of-course exam with 88.0 percent scoring three or higher. The exam is among a dozen offered in the popular science, technology, mathematics, and engineering (STEM) fields. The state’s 2017 graduates took 23,420 STEM exams a 7.1 percent increase from the prior year’s graduates.

“We know that equity in access and opportunity is an issue for students of color, students with disabilities, students from low-income families, and those who are learning English,” Evers said. “While we are making progress in closing equity gaps, our goal is for all students to have access to the resources and rigor they need to be successful. And, we’re not there yet.” 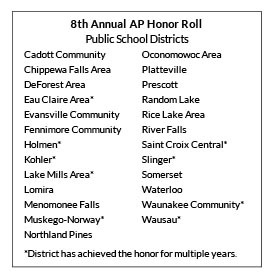 The College Board named 25 Wisconsin public school districts to its Eighth Annual Honor Roll. Based on three years of data, the honor roll recognizes districts that are committed to increasing access to AP for underrepresented students while simultaneously maintaining or increasing the percentage of students earning AP exam scores of three or higher.

Wisconsin’s 2017 graduates who were successful on their AP exams are estimated to save nearly $39.5 million in college costs. The calculation assumes three credits for each AP course scored three or higher and an average cost for in-state tuition and fees of $298.73 per credit hour.

NOTES: The College Board’s “AP Cohort Data Report: Graduating Class of 2017” provides information for public school graduates only. Breakdowns by racial and ethnic groups or by schools and districts are not available from this report.