“The primary goal of the 2020 Census is to count everyone once, only once, and in the right place,” United States Census Bureau. 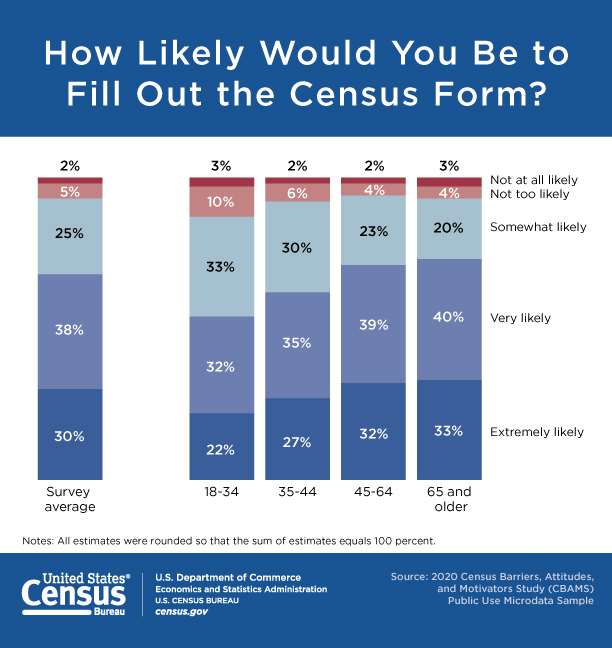 Libraries are in a unique position to achieve the goal of a Complete Count in Wisconsin and nationwide. The 2020 Census Barriers, Attitudes, and Motivators Study (CBAMS) (known as the 2020 Census Planning Survey) gauged the public’s intention to respond to the 2020 Census. Of the 17,283 respondents, 30% stated they were “extremely likely” to fill out the census form. Another 38% said they would be “very likely” to complete the form. This leaves almost one third of survey respondents saying they are “somewhat likely,” “not too likely,” or “not at all likely” to respond to the census. The Census Bureau’s Research and Analytics Team and Team Young & Rubicam (Y&R) state that, “actual response rates are often lower than intended response rates.” According to the American Library Association, 99% of the hard-to-count census tracts are within five miles of a public library. This demonstrates why it is so important that the library as a trusted community entity, get involved in helping their community and state achieve a complete count.

“Community influencers create localized messaging that resonates with the population in their area. They are trusted voices and are best suited to mobilize community resources in an efficient manner,” United States Census Bureau.

To achieve the primary goal of counting everyone, the United States Census Bureau is promoting opportunities to connect tribal, state, and local governments, business, media, and community and faith-based organizations through Complete Count Committees. Complete Count Committees organize to close gaps in who is responding to the census, increase knowledge about the census, eliminate barriers to completing the census, and provide motivation to improve response rates and complete the census.

Wisconsin can look to the Utah Complete Count Commission for inspiration. The commission is committed to ensuring a complete count and is leading the nation in organizing, crafting a message, and implementing a strategy to count all Utahns. The commission has a statewide outreach strategy to address hard-to-count populations, privacy and trust concerns (including citizenship status), unfamiliarity with the census, and discomfort with technology. Utah is utilizing resources such as the Census Bureau’s Response Outreach Area Mapper (ROAM) and Partnerships to effectively target outreach efforts. The Utah Complete Count Commission is an example of how collaborative efforts can efficiently apportion resources to improve a state’s ability to reach every resident.

$9,142,484,123 in federal funding at stake
Medicaid, SNAP, highway projects, children’s health insurance, Title I and Special Education, and the National School Lunch Program are Wisconsin’s largest federal assistance programs. An incomplete count puts these programs at risk of losing resources in our state and leaves federal tax dollars free to flow away from Wisconsin every year for the next 10 years.
Source: The George Washington University Institute of Public Policy

$1,584 per resident
Each Wisconsin resident generates approximately $1,584 in federal program funding for critical services for Wisconsin residents. This figure is a per capita figure of the 16 largest federal programs and the state population. The state population count and federal funding flow are not connected in a straight, linear relationship. However, this figure does represent just how important it is to count everyone in Wisconsin.
Source: The George Washington University Institute of Public Policy

Libraries are the Key

At the forefront of providing services to hard-to-count residents, libraries should promote the services they offer and help people apply and train for Census jobs, provide information to the community through meetings and outreach, collaborate with policy- and decision-makers, provide technology resources to complete the online census form, and demonstrate the importance of census data to their communities. (Suggestions shared from the American Library Association’s Libraries and the 2020 Census brief).

For more information about how your library can help to ensure all Wisconsin residents are counted, visit the American Library Association’s 2020 Census page for several resources libraries can use to make the 2020 United States Census a success in your community. For the short version, check out the Libraries and the 2020 Census brief.

Read our previous post, Census 2020—Libraries Can Make it Count.

The U.S. Census Bureau has some simple suggestions for you to take action. If you are in Wisconsin, you are important. Make your presence known for the benefit of the community.

Stay informed on our latest news!