MADISON — As required by state statute on or by Oct. 15 of each year, the Wisconsin Department of Public Instruction has provided the certified amount each public school district will receive from the $4.656 billion appropriated for general state aid for the 2018-19 school year. This amounts to a $72.75 million (1.6 percent) increase in state general aids compared to last year.

Roughly 55 percent of the state’s public school districts (230 of 422) will receive more general state aid this school year than they did in 2017‑18. The Friess Lake and Richfield J 1 school districts consolidated on July 1 but are treated as separate districts for general aid payments. General aid is based on 2017-18 audited numbers that include membership, property value, and eligible expenditures. Aid amounts for each public school district can be found on the department’s School Financial Services website, both alphabetically and by percent change.

School membership, which differs from enrollment, increased by 472 full‑time equivalent (FTE) students and totaled 855,804 FTE for 2017-18. Growth in FTE figures is due in large part to new pupils enrolled in the Wisconsin Parental Choice and Special Needs Scholarship programs. New students using the Wisconsin, Racine, and Special Needs private school choice programs are counted in membership for state aid purposes. The general aid of the district in which the participating student resides is then reduced to cover the payments to the private school. 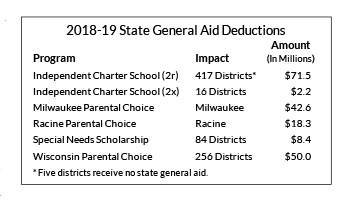 This year, a new deduction will be applied to 16 districts to pay for the 253 FTE pupils enrolled in two independent charter schools operating under the Office of Educational Opportunity, operated by the University of Wisconsin‑System. Affected districts add these pupils to their revenue limit membership this year, which may or may not provide them additional revenue limit authority. They will collectively see an aid deduction of $2.2 million.

Milwaukee Public Schools will have a state aid deduction estimated at $42.6 million to pay its statutory share (19.2 percent) of the Milwaukee Parental Choice Program (MPCP). Overall, that program is expected to total $221.8 million for 28,100 FTE students attending private choice schools under MPCP this school year. General program revenue (GPR), state tax dollars, will pay the remaining MPCP costs for 2018‑19 and will increase by 3.2 percent each year until GPR pays 100 percent of MPCP costs in 2024-25.

Shared costs per pupil, a main factor in the school aid formula, include the operating and debt costs of a school district. Shared costs range from $26,122 in the North Lakeland (K8) School District in Manitowish Waters to $8,296 in the Crivitz School District. The statewide average shared cost per pupil for 2017‑18 was $10,810.

Changes in property valuations are another factor that impacts whether a district receives more or less general state aid than the prior school year. Property valuations per pupil range from $9,373,200 in North Lakeland to $188,400 in Beloit, a ratio of 50:1 between the state’s most and least property wealthy districts. Beloit is the state’s highest aided district, receiving state general aid that covers 83.1 percent of its eligible shared costs. There are 21 districts that receive no equalization aid because their property wealth exceeds $1.9 million per pupil.

General aid totals do not include per pupil categorical aid amounts, which are based on a three year average of Third Friday in September membership. That aid is $654 per pupil for the 2018-19 school year, estimated at $549 million, and will be paid in March 2019.

NOTE: Tables that show the 2018-19 General Aid Certification for the state’s public school districts can be found online: Alpha By District. By Percent Change.