MADISON — Wisconsin’s 2018 public school graduates took more than 71,000 Advanced Placement (AP) exams while in high school, with 66.4 percent of those exams scored three or higher on a five-point scale and eligible for college credit, advance standing, or both at many colleges and universities.

Overall, Wisconsin had 22,965 graduates from the class of 2018 who took at least one end-of-course AP exam last May. That number represents 37.5 percent of estimated graduates (61,266). Overall, 26.1 percent of graduates scored a three or higher on an AP exam during high school. Many students take multiple exams from the 38 offered in the AP program. Nationally, more than 1.2 million graduates took an AP exam while in high school and 23.5 percent of those students earned a score of three or higher on an exam.

“The Advanced Placement program provides students an opportunity to take college-level coursework while in high school. Doing well on the exams gives our kids a head start on postsecondary studies in our state’s public and private colleges and universities,” said State Superintendent Carolyn Stanford Taylor. 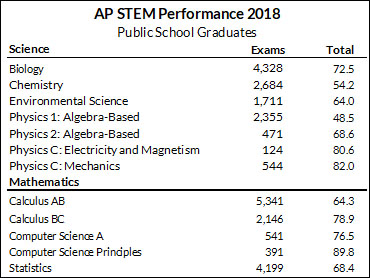 “Students of color, students with disabilities, students from low-income families, and those who are learning English often face challenges in accessing advanced coursework and opportunities like the AP program,” Stanford Taylor noted. “We are determined to continue our work with schools and communities to close equity gaps so all students have access to the resources and rigor they need to be successful.”

Wisconsin’s 2018 graduates who earned scores of three or higher on their AP exams are estimated to save nearly $43 million in college costs. The calculation assumes three credits for each AP course scored three or higher and an average cost for in-state tuition and fees of $302.67 per credit hour.

NOTES: The College Board’s “AP Cohort Data Report: Graduating Class of 2018” provides information for public school graduates only. Breakdowns by racial and ethnic groups or by schools and districts are not available from this report. Additional data about Wisconsin’s AP results for the class of 2018 is in the official news release.