MADISON — Overall results held steady on Wisconsin Student Assessment System (WSAS) exams given during the 2017-18 school year, with some promising gains in mathematics achievement across most grade levels. 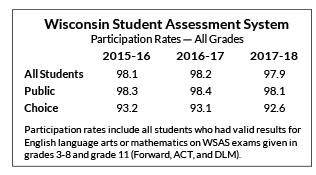 The WSAS consists of the Forward Exam given in grades three through eight, the ACT Plus Writing given at grade 11, and Dynamic Learning Maps (DLM) given across all tested grades to students with significant cognitive disabilities. Overall, 455,291 public and private choice school students took WSAS exams in 2017-18, an increase of 2,265 students from the prior year. Of total WSAS test takers, 4,367 public school students took the DLM. The test participation rate was down slightly from prior years, with 98.1 percent of public school students and 92.6 percent of private choice school students taking statewide exams in 2017‑18. Results from the WSAS are a foundational component of school and district report cards that will be issued later this year.

A look at results across the three tests shows 40.6 percent of all students had scores that were proficient or advanced in English language arts (ELA), 41.1 percent in mathematics, and 42.5 percent in science. ELA results are closer to the performance level of 2015-16, mathematics is gradually improving, and science remains steady. 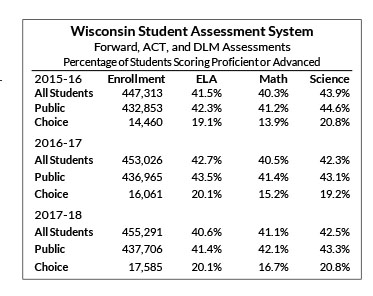 Statewide data disaggregated by racial and ethnic groups, English proficiency as well as disability and economic status showed achievement gaps for both public and private choice schools. Wisconsin’s plan to meet requirements of federal education law, the Every Student Succeeds Act, includes a goal of cutting achievement gaps in half over the next six years. To help meet this goal, the Department of Public Instruction’s 2019‑21 state budget proposal includes targeted provisions to lift student achievement.

The 2017-18 school year marks the third year of administration of the online Forward Exam. Students in grades three through eight take tests in ELA and mathematics. In grades four and eight students take a science assessment required under both state and federal law, and in grades four, eight, and 10 students take a social studies exam required in state law. This is the fourth year of administration of the DLM. The 2018 assessment window ran from March 19 through May 4.

This is the fourth year of ACT Plus Writing and DLM testing of 11th-grade students. The ACT, a popular nationwide college admissions test that measures student readiness for college and careers, is administered via paper and pencil. Statewide, most of the 66,336 public and private choice school students who took ACT tests in ELA, which includes English, reading and writing; mathematics; and science did so on Feb. 27. A make-up day for those who missed regular testing was offered March 20.

Overall, the state’s public and private choice school students had a composite score of 19.7 on a scale of one to 36, down three-tenths of a point from 2016‑17. On subtests for 2017‑18, scores for all students were 18.1 in ELA, 19.8 in mathematics, and 20.1 in science. Those scores fall in the WSAS basic proficiency level. The 1,690 private school choice students who took ACT tests in 2017-18 posted small point gains from the prior year in ELA and science. Test score results tend to fluctuate more with smaller groups of students.