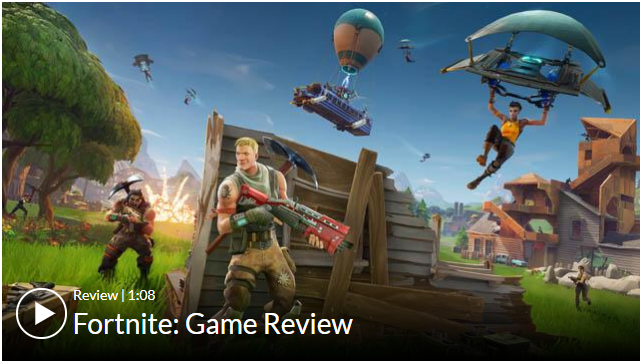 Are your kids playing Fortnite? If not, you've probably heard them talking about it. Since it's such a popular game, we're providing a great overview from Common Sense Media on what the game is, and other information for parents to know!

This survival-action game is a bit like what you'd get if you combined a sandbox-building game like Minecraft with an action shooter like Call of Duty. On one hand, it's getting major points with kids and parents alike for building teamwork and thoughtful collaboration. On the other hand, it's a combat-based game with tons of guns and violence.

Fortnite is a video game for PlayStation 4, Xbox One, Windows, Mac, and mobile that takes elements from sandbox-building games and adds the fast-paced action of a third-person shooter. There are two modes to the game: a solo version called Save the World and the hugely popular multiplayer version called Battle Royale.

What is Fortnite: Battle Royale?

If your kids say they're playing Fortnite, they're probably talking about Battle Royale, the free-to-play multiplayer offshoot of Fortnite. In this version, up to 100 people participate in a match together. Players are dropped onto the game map and must compete to be the last one standing by killing every other player in the game. During the game, players collect weapons, build safe structures, and try to avoid the Storm that damages all players outside of a safe zone. Unlike the Save the World version, there aren't any zombies to kill, which makes it a less scary version to play. However, players can buy items to make themselves look like a zombie or another creepy character.

What is Save the World?

Save the World is the traditional solo campaign in the game Fortnite. Unlike in Battle Royale, where players compete against each other, players in the Save the World mode are survivors of an apocalyptic storm where the few remaining humans must band together to defeat creepy zombie-like creatures called husks.

Is Fortnite appropriate for kids?

For some parents, the cartoonish, bloodless style of the action in Fortnite makes the violence less problematic than the aggressive gore in other popular shooter games. But the game's online chat feature -- especially in Battle Royale -- could expose younger players to offensive language or mature content from random strangers. Common Sense doesn't recommend games with open chat for kids under 13, but with the right controls and parental guidance, this can be a tween-friendly alternative to violent first-person shooters.

How much does Fortnite cost?

The current cost of the full Fortnite is $39.99, although the developer, Epic Games, has suggested it will make the game free-to-play sometime in 2018. But players can currently download Fortnite: Battle Royale for free.

Are there microtransactions in Fortnite?

There are frequent opportunities for players to spend real money on items in the game. Fortnite encourages purchases such as upgrades to editions such as Deluxe and Super Deluxe, as well as in-game currency to buy bonus items. There's also the Premium Battle Pass, a $10 subscription that lets players compete on more levels and win exclusive game skins/costumes.

What platforms can you play Fortnite on?

Fortnite is available on PlayStation 4, Xbox One, Windows, and Mac. Users need an internet connection to play. A mobile version is also available for iOS and Android. Players can play "cross-platform," which means a Windows player can be on a team with a console player, for example.

How do you turn off voice chat in Fortnite: Battle Royale?

Open the Settings menu in the top right of the main Fortnite page by selecting the three bars, then the cog icon. Choose the Audio tab at the top of the screen. From there, you can adjust several audio features, including voice chat. Turn the setting from on to off by tapping the arrows.

How long is a match of Fortnite: Battle Royale?
Each match in Battle Royale lasts about 20 minutes, although players who are killed early play for less time.

How do I manage screen time for my kids when they're playing Fortnite?

When each match only takes 20 minutes, it's easy to fall into the trap of "just one more" -- sort of how you end up binge-watching an entire season of Stranger Things. But you can take advantage of the quick matches by using them as a natural stopping point in gameplay. Some kids benefit from using a timer, or limiting themselves to a certain number of matches per day.

Need more information on privacy settings for game consoles? The Entertainment Software Rating Board (ESRB) is a great resource!

Parental controls allow parents to help manage their children's video game use, even when they're not around. Available for all current consoles, handhelds, smartphones and computers, they can be activated to block games by age rating. Certain device settings even allow parents to restrict access to the Internet, disable in-game purchases, regulate the amount of time your child can play and more.

The ESRB has guides to on how to activate the parental controls on your game system(s). Check them out at esrb.org!