On the first day of school in 1966 — long before she became Wisconsin’s assistant state superintendent for the Division for Learning Support — Carolyn Stanford-Taylor was walking to school with her mother and four of her siblings in Marks, Mississippi, when her mother suddenly stopped at a crossroads.

“She said, ‘You know, the desegregation order has come down, and so you have a choice. Do you want to go to the Black school or the White school?’”

As the adult, Mrs. Stanford knew how difficult the latter road might be, but the children thought only of the swimming pool and sizeable athletic fields at that other school they had seen across the railroad tracks, things they didn’t have at the school they previously attended. “‘We want to go to the White school!’”

That year the Stanfords and three other families became the first to integrate the schools in Marks — and it was not easy. The teachers and administrators at the new school “were the worst, their behavior was worse than the students,” Stanford-Taylor says. “They didn’t want us there.” Those being the days of corporal punishment, “if you did the littlest thing, you’d get beaten.”

One day, Carolyn was sent home, told that her dress was not as long as the dress code called for. Her mother walked back to school with her and made sure the replacement outfit was acceptable. The next week, she was sent home once again, but this time, her mother did not allow a change of clothes. “She walked back with me and said, ‘This is the same dress you said last week was OK. She is 11 years old. Do not send her home again.’”

It was this kind of firm advocacy, along with her parents’ belief in the value of education, that Stanford-Taylor credits for her success and that of her siblings. Such advocacy was more difficult for others in the community, since many depended on hostile plantation owners for not only their livelihood but also their housing.

The African-American students never got to swim in the pool. “They filled it in with concrete, rather than have to swim with us,” Stanford-Taylor says.

By the time she graduated, most White students in her high school moved to a newly opened private school. The community then consolidated the nearly deserted integrated school with the former “Black school,” resulting in a single, predominantly African-American public school, overseen by the hostile principal from the former “White school.” (Statistics suggest de facto segregation has continued in Marks, with about 98 percent of public school students in the district of African-American ethnicity in 2007, compared to a rate of only 67 percent in the city as a whole as of the 2010 census.)

Yet there was one White teacher, a teacher of English, who made a great difference for Stanford-Taylor, telling her she had a gift for writing.

“Nobody had ever told me that! ... And that meant the world to me. It boosted my self-esteem and my belief in who I was and what I could do.”

Noting this kind of educator influence is very common among successful people, “I’m passionate about saying to our educators, ‘Relationships matter — take the time!’ I know it’s a busy world and everybody says, ‘I don’t have time to do this.’ But if you take the time on the front end, it pays dividends along the way. All this corrective behavior — if kids feel you care for them, they will work their buns off for you. And you can correct them and they will accept it and they’ll keep going.” 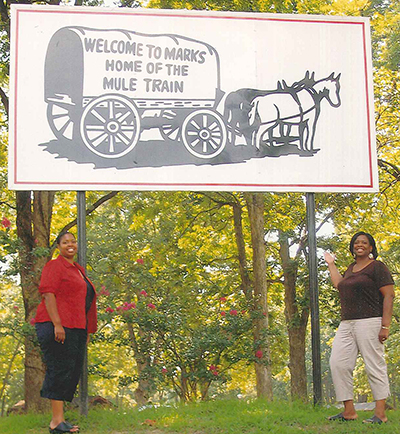 “I couldn’t believe they finally acknowledged that something happened here,” Stanford-Taylor says. She is pictured here in front of the commemorative sign with her daughter, Carlettra Stanford, currently following in her mother’s footsteps as a principal in Madison.

Despite the challenges, Carolyn and most of her siblings graduated, albeit one year late in the case of her brother, Larry — who was held back a year for refusing to endure the beatings. When he did graduate, it was as class salutatorian. After being recruited by the University of Wisconsin College of Engineering, Larry convinced Carolyn to come to the UW as well. She applied, got admitted with the needed funds, became a Badger, and soon found her calling in education.

Having seen “kids who were turned off to education because of all the things that were done to them,” Stanford-Taylor reflects, “I kind of saw myself as that person to bring hope, and optimism, and a different view of the world to kids — all kids.”

Though she originally imagined returning to her hometown, a year after graduation Stanford-Taylor was teaching in the Madison Metropolitan School District. For 10 years, she taught students ranging from fifth to eighth grade, then served as a principal for 11 years. She came to the Department of Public Instruction in 2001 to join the Cabinet of then state superintendent Elizabeth Burmaster.

Recently, Stanford-Taylor and her daughter visited Marks and were delighted to see a sign outside the community commemorating a historic moment in the civil rights movement.

Marks is the seat of what was considered the “poorest county in the nation” in the late 1960s. Dr. Martin Luther King, Jr., broke into tears on at least two occasions after observing poverty in Marks — said to have been a key inspiration for his Poor People’s Campaign of 1968, in which one of nine “regional caravans” started in Marks and, like the other eight caravans, journeyed to a tent city in Washington, D.C., where protestors stayed for six weeks.

The Marks caravan was The Mule Train, a dramatization of Southern poverty led by mule-driven carts and including about a hundred marchers. Young Stanford-Taylor, who had attended rallies in town and had seen her parents assisting the civil rights movement, wanted to tag along on The Mule Train with another family, but her mother wouldn’t allow it.

African-American History Month is often a time to reflect on the past and future of equality in America. Stanford-Taylor says, “There have been improvements, a lot of things have been accomplished, but I think we’re at risk of losing those things.... A people who forget their history are doomed to repeat it. And so we need to tell those stories ... There are people who lost their lives, who lost their opportunities, because they spoke up for me. And who’s doing that for the next generation of kids, who’s shepherding those kids along?”

She believes there’s a role for everyone to play, working together.

“What we can do I think is to embrace this richness of diversity that we have instead of fearing it. And don’t always look at things as ‘I’m being a called a racist because I don’t understand,’ but to deepen your understanding of others and other cultures.... There’s this norm and the norm is based on White America. And it can’t be that way when embracing everyone; there has to be that recognition that we all bring something of value to the table. And it’s not that [something] is wrong because it’s different that what you do or what you believe.”