"Books on the Bus" Invented in Southern Door

Wisconsin school districts might consider boosting students' literacy and quality of life by emulating a simple yet powerful idea from a bus driver in the Southern Door County School District, which has already won awards and positive media attention.

It all started when Ted and Dee Chaudoir's daughter moved away to college and they converted her room to a quilting studio. There were lots of great kids' books to clean out, and she didn't want them.

"We were more attached to some of those books that we'd been reading to her when she was a kid than she was," Ted told DPI-ConnectEd. "So — what to do with them."

Donating them to a thrift store would have been okay, but not very sentimental. Ted, who like Dee is a bus driver for the school district, decided to see if any of the students would like to read them during their long ride to school.

"As soon as I told [Dee] how excited they were to have them, we split them up and she took a share, too." 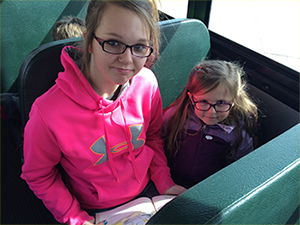 Some of the middle and high school students "jump in with both feet" when asked if they'd like to read to younger students, Chaudoir says.

They had no idea what was ahead. Kids love the books. Many older kids love reading to younger kids (which has been especially helpful with the advent of preschoolers on the ride).

The district's reading specialist, Missy Bousley, was amazed to hear what was happening.

"It was [Bousley] that decided we should publicize it right away, and that really probably was the main feature of it exploding like it did."

Bousley helped acquire more books and expand the program to other buses in the district. Parents have been thrilled to hear what their kids are doing on the bus, the local media has been interested, and awards and grants have been won (from the Wisconsin State Reading Association and others).

With all the attention, Ted Chaudoir says, "we felt compelled to continue to try to improve [the program] so that other people could continue to utilize it easily." 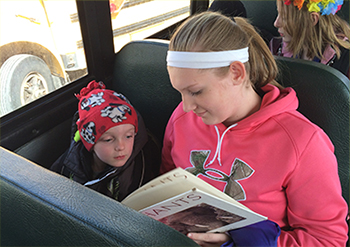 "The kids that are reading and being read to are both benefiting from this literary experience," wrote Bousley and Vickman in an award nomination letter, "and all of Ted's riders now enjoy a quieter bus ride where they can get work done or not get stressed out before and after school."

Chaudoir has been working with Bousley and Superintendent Patti Vickman to expand the program not only within Southern Door but to other school districts that might want to copy the practice.

They have even created a website, https://sites.google.com/a/southerndoor.k12.wi.us/books-on-the-bus/home, designed to spread the word. It includes their tips and tricks for keeping things running smoothly — things like having a contact person, ordering seat covers with book-sized slots in them (they found a local vendor who sews them cheaply), and where to get grants to cover expenses.

Chaudoir explains that although bus drivers might initially think Books on the Bus looks like extra work, it's really the opposite: "Once they understand that it's easy and it benefits them as well, by having kids occupied in something — especially once you throw one box of books on board and see how it occupies the kids — then they're good to go." 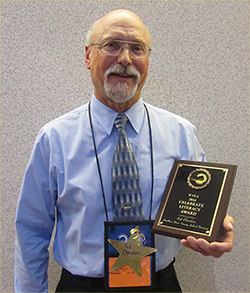 It's been powerful on a personal level for the Chaudoirs, Ted says. "Even though it's important just to have safe transportation and a good atmosphere in the bus, we know that teachers value kids who love to read or love books, and so being able to help in that respect I think adds to even our self-esteem."