Scientists from Europe or Australia 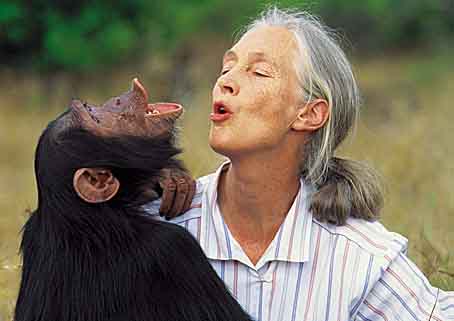 Dr. Goodall  studied wild chimpanzees in Tanzania, and was able to get close enough to document their (sometimes) strange behavior. She found out that chimpanzees have social behavior and sometimes behave like humans in their social and family interactions. They can communicate and show emotion. Dr. Goodall has received many awards and honors for environmental and humanitarian work as an advocate for conservation and animal welfare. She is on the board of the Nonhuman Rights Project.

As a child, Jane dreamed of living among wild animals and writing about them. Tarzan and Dr. Dolittle were her favorite books, and she knew she’d be a much better jungle companion for Tarzan than that other Jane. From the beginning, Jane’s mother, Vanne, was encouraging. “You can do whatever you set your mind to,” she said. From - JaneGoodall.org.

The Jane Goodall Institute - information about Jane Goodall, her research, and her life work (likely grades 5+)

The Watcher: Jane Goodall's Life with the Chimps, by Jeanette Winter (grades 2+)

Several videos of Jane throughout the Jane Goodall Institute site

Brief video on tool use by chimpanzees and several others featuring Jane Goodall, from Animal Planet

In the Shadow of Man, by Jane Goodall Dr. Elizabeth Blackburn is a cellular biologist from Australia (Tasmania). Shw now conducts her research in California. She studies the telomere, the structure at the end of a chromosome that protects it, and particularly how it relates to aging and cancer. She discovered an enzyme, telomerase, that replenishes this structure. She also studies bioethics, which relates to controversial  subjects such as stem cell research. Dr. Blackburn received the Nobel Prize in 2009 for physiology and medicine.

“I remember I had this chemistry set out in this little garden shed and I thought that was just the most wonderful thing. But it wasn’t the kind of thing I would talk about with my school friends. And I remember I had little guinea pigs and one of them had little babies. They were born very mature looking, not bare, they had fur on them. I put them in my hand and showed them to one of my friends and it was like—aarrghh! I thought they were so cute but she saw them as little vermin... I didn’t want to just know names of things. I remember really wanting to know how it all worked.” From an interview at Clinical Chemistry.

Are We There Yet? A Journey Around Australia by Alison Lester based on a story from her life (grades K-4)

Range of stories, games, and other resources for kids related to genetics from AMNH

Short video illustrating that all life is made of cells (MS)

From Molecules to Organisms, K-12 lessons curated and commented on by NSTA

Heredity and Genetics, K-8 lessons curated and commented on by NSTA