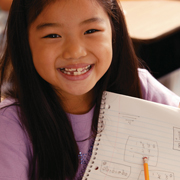 Notions of literacy in science run in several directions that do not always have clear definitions or delineations. Several resources describe how teachers can apply literacy strategies to support student understanding. Current literature emphasizes “disciplinary literacy” in science, while longstanding commentary also emphasizes the importance of a scientifically literate populace. Below, I propose definitions for these three ideas--applying literacy strategies in science, disciplinary literacy, and scientific literacy--that connect the terms science and literacy, providing examples to illustrate how they differ. At the end, I describe two science lessons, one from lower elementary and one from middle school, showing how these strategies and frameworks intersect.

Applying Literacy Strategies to Science
Generally, when I hear about science and literacy, it involves helping students comprehend their science textbook or other science reading. It’s a series of strategies from the field of literacy that educators can apply in a science context. For example, teachers could ask students to do a “close reading” of a text, pulling out specific vocabulary, key ideas, and answers to text-based questions. Or, a teacher might pre-teach vocabulary, and have students write the words in sentences and draw pictures illustrating those words. Perhaps students provide one another feedback on the effectiveness of a presentation. Did you speak clearly and emphasize a few main points? Did you have good eye contact? Generally, these strategies are useful, but they’re not science specific. They could be applied to any disciplinary context. These types of strategies are often mislabeled as “disciplinary literacy.” I would advocate they are not. Disciplinary literacy is not just a new name for reading in a content area.

Disciplinary Literacy
Scientists have a unique way of working with text and communicating ideas. They read an article or watch a video with a particular lens and a particular way of thinking about the material. Engaging with disciplinary literacy in science means approaching or creating a text with that lens. Notably, the a text is not just a book. The Wisconsin DPI defines text as any communication, spoken, written, or visual, involving language. Reading like a scientist is different from having strategies to comprehend a complex text, and the texts involved have unique characteristics. Further, if students themselves are writing like scientists, their own texts can become the scientific texts that they collaboratively interact with and revise over time. In sum, disciplinary literacy in science is the confluence of science content knowledge, experience, and skills, merged with the ability to read, write, listen, and speak, in order to effectively communicate about scientific phenomena.

As a disciplinary literacy task in a classroom, students might be asked to write an effective lab report or decipher the appropriateness of a methodology explained in a scientific article. They might listen to audio clips, describing with evidence how one bird’s “song” differs throughout a day. Or, they could present a brief description of an investigation they’re conducting in order to receive feedback from peers.

Scientific Literacy
Scientists use a set of skills that is broader than text, moving beyond the realm of “literacy” in terms of language, to specific ways of thinking about and interacting with particular phenomena. Therefore, disciplinary literacy in science is a subset of the broader abilities described within the concept of scientific literacy.

Building on ideas from the National Science Education Standards (p. 22, 1996), scientific literacy implies a base level  of scientific understanding and ability that enables a student to effectively “ask, find, or determine answers to questions derived from curiosity about everyday experiences.” Literacy skills generally connect with science understanding as a student researches a phenomenon of interest or even watches the news. Further, scientific literacy and disciplinary literacy merge in the ability to “read with understanding articles about science in the popular press and to engage in social conversation about the validity of the conclusions.”  Further, “a literate citizen should be able to evaluate the quality of scientific information on the basis of its source and the methods used to generate it”--a process that requires an understanding of scientific practices along with the literacy skill of evaluating sources.

Clearly, disciplinary literacy and scientific literacy work together. Because “scientific literacy implies that a person can identify scientific issues underlying national and local decisions and express positions that are scientifically and technologically informed,” our students must develop the skills and understanding to clearly communicate complex, scientific information through various media. They must also learn “to pose and evaluate arguments based on evidence and to apply conclusions from such arguments appropriately.” Argumentation with evidence is a literacy skill that applies across all disciplines, but it requires an ability to apply unique disciplinary lenses to evidence and communication methods to effectively carry it out in a scientific context.

Continuing with the brief bird song example mentioned above, scientific literacy skills would be necessary to generate meaningful questions, such as, “Why do birds sing?” Or, further, “Do variations in bird song correlate with particular behaviors?” Students might start with making observations of bird behaviors and songs through a set timeframe, then comparing and contrasting bird songs. Determining a proper timeframe, sufficient subjects for study, and other investigation parameters would be aspects of scientific literacy. Effectively collaborating with classmates to conduct the investigation and communicating explanations with evidence would involve essential disciplinary literacy skills.

In other words, scientific literacy encompasses a broader range of work with scientific practices than disciplinary literacy. Students can show some ability and understanding of science practices through text, but scientific literacy also requires physical performance of these practices. Further, it requires background knowledge, whereas a disciplinary task in science, such as creating an effective data table, might not require such knowledge. Students planning and conducting a chemistry experiment moves beyond textual interaction to knowing when to use a fume hood and how to be safe more generally in a lab. Scientific literacy also requires mathematical thinking and a comprehension of scale for effective study of daily phenomena. These skills come into play in defining and modeling a particular system, with all relevant components.

In a kindergarten classroom, a teacher puts a stuffed animal on a rolling chair in front of the room. The teacher asks, “How could we make ‘Stuffy’ move? Share an idea with a partner” [DL]. She then circulates to hear student talk [L]. She randomly asks a few students to come describe and demonstrate their method [DL]. As students share their method, she’ll be pointing out terms they use, particularly highlighting or prompting the terms push and pull. Next, she has students write in their science notebooks, “A force is a push or a pull” [L]. This writing may be scaffolded by having some students just trace these words on a worksheet glued into the notebook [L]. Above that writing, she asks students to draw a picture of their idea, or another pair’s idea, for how to move the animal [DL]. Some student pairs that haven’t shared yet are then given the opportunity to share and explain their drawing [DL]. Students are specifically asked to explain, “What is causing the force in your picture?” [SL].

For homework, students are asked to somehow show their parents a push and a pull and tell them that a push or a pull is a force [DL]. For accountability, parents could help students write or draw about what they did, or students would just know they would have to share the next day.

In class the next day, the teacher asks students to share some of the pushes and pulls they showed their parents, asking them to use the word force [DL]. She then asks students to talk with their partner about, “Why did the animal in the chair sometimes move far and sometimes not move as far when we added a force?” [SL]. She then asks some students to demonstrate and describe an idea for making the animal/chair more far or less far; ideally, students will push or pull with varying degrees of force [SL]. Students are then asked to write in their notebooks, “A big force makes it move more!” [L] With a teacher example as needed, they also draw an image of what this might look like [DL].

As a possible extension: how would a scientist decide for sure which went further? How would she measure it? The class could discuss and perform different means for measurement, standard and nonstandard [SL].

Student groups begin with a set of rocks and crystals at their table. The teacher asks them to generate a set of science-related questions in relation to them, noting those questions in their notebooks [SL]. Each group shares one of their questions, looking for one that’s different from other groups and adding new ideas they like to their list [L]. The teacher then asks students to observe the rocks and crystals with a goal of generating a list of characteristics based on/related to those patterns [SL]. Groups share how they’ve characterized the rocks, adding interesting new ideas shared to their own lists [L]. Tools such as microscopes or magnifying lenses will be useful in their observations [SL].

Students next read an article on rock and mineral types, including characteristics of those rocks and minerals [L]. The teacher asks them to specifically find information on characteristics of the rock types that relate to or are similar to the list of characteristics (groupings) that they’ve generated [DL]. Finally, groups of students put their rocks into groups based on the categories and characteristics provided in the text, providing written rationale and evidence for why each rock would be placed within each group [DL].

Extension: Before reading the text, the teacher could also elicit background information and use characteristics generated by students to have them predict what types of processes would have been required to create these rocks and crystals, with the given characteristics [SL]. One possible question, “What do you observe about the rocks that makes you think different processes might have been involved in forming and shaping them?” Further, they could model and investigate where the energy involved in creating the rocks came from, linking processes with types of energy (such as gravity providing the energy for erosion due to water or the thermal energy of earth’s core providing energy for metamorphosis of rocks and creation of crystals) [DL and SL].

As I labeled the literacy facets of these lessons, I more fully realized how integrated these components should be in a classroom all the time. Effective science instruction constantly: 1) supports the literacy work that students do (L), 2) as it encourages them to interact with text like scientists (DL), 3) while they engage in meaningful scientific thinking and practice (SL).