Select a topic to jump to that section:

Sample ACCESS for ELLs score reports can be found on the WIDA website. Parent guides and sample letters are available there in a number of languages, along with interpretive guides. Score reports themselves are mailed to districts in approximately Mid-April, and are available for download from the WIDA AMS in over 40 languages. Districts are responsible for providing score reports to parents in a language they can understand, including oral translations when no written translation is available. Upon request by an individual with a disability, districts must provide score reports in an alternate format accessible to that individual.

Users with the student detail analyst permission in WISEdash for Districts can see student-level information for students in their district, including historical assessment data from tests taken in other districts in Wisconsin. In addition to ACCESS for ELLs data, calculated values for Student Growth Percentiles (SGPs) and an on-track-to-proficiency measure can be found for students with two consecutive ACCESS for ELLs tests.

The English Learner Data in WISEdash overview explains where to find these data, and the Analyzing EL Growth Data document goes into detail on how to analyze these data to drive program improvement and student success.

Every student, whether or not they are an English Learner (EL), has an English Language Proficiency (ELP) code in WISEdata:

WISEdata ELP codes come from one of three places:`
For more information on ELP Codes see the EL Policy Handbook.

Students who demonstrate proficiency on the ACCESS for ELLs assessment are eligible to be reclassified as Former EL. Former ELs are denoted with ELP 6 in WISEdata. For more information on reclassification, please see Chapter 6 - Reclassification and Monitoring in the EL Policy Handbook.

Students who may be Misclassified

If a non-EL is accidentally administered ACCESS or a student may be misidentified as EL or Non-EL, please see Chapter 4 - Students who may be Misclassified in the EL Policy Handbook.

A student with a current ELP code in WISEdash should retain that ELP code if they move into another district, unless there is evidence of a misclassification. (See above.) Students ELP 1-5 with ELP codes more than a year old should be administered the WIDA Screener to determine an approximate ELP level for the school year.

Families have a right to opt their student out of EL Services. However, even when a student who has been identified as an EL is not receiving EL Services:

These factors remain in effect until the student graduates, transfers, or achieves a proficient score on the ACCESS for ELLs assessment and is exited from EL status. See Chapter 8 - EL Programming for more information regarding parental opt-out of EL services.

Once a student is enrolled in your district from another in state district and this enrollment data is uploaded to WISEdata, you may notice that an ELP error appears in WISEdash Portal. Clicking ‘Details’ on the error message will show what ELP your SIS has pushed to WISEdata, and the expected value, based on previous testing in Wisconsin. If an ELP assessment was administered within the last year, this ELP code may be used in place of a screener for determining ELP services. If the most recent ELP score is more than a year old and is ELP 1-5, the student should be screened to determine their current ELP level.

Federal law requires that all students have a determination of EL/not­-EL made within 30 days of enrollment. Due to this requirement, most ELP screener scores are uploaded into WISEdata in September or October. For schools who do spring enrollment, the scores are entered either in spring when the ELP screener is used, or in fall when the student starts school.

In a few other cases, such as a change in school district mid­year, an ELP screener score could be entered at other times. However, the determination of EL/not­-EL is required to be made within 30 days of enrollment, and language supports offered if needed.

ACCESS for ELLs is administered in the winter, generally from early December until early February. Scores are received back in the spring, and generally uploaded by DPI into WISEdata in the summer.

If it is necessary to update or correct a WISEdata ELP code, this can be done in the local SIS at any time, provided the district has captured the necessary information to support this change. See Chapter 4 - Students who may be Misclassified in the EL Policy Handbook for more information.

This chart outlines the critical points in time for data handling to ensure that ACCESS for ELLs testing is implemented successfully. 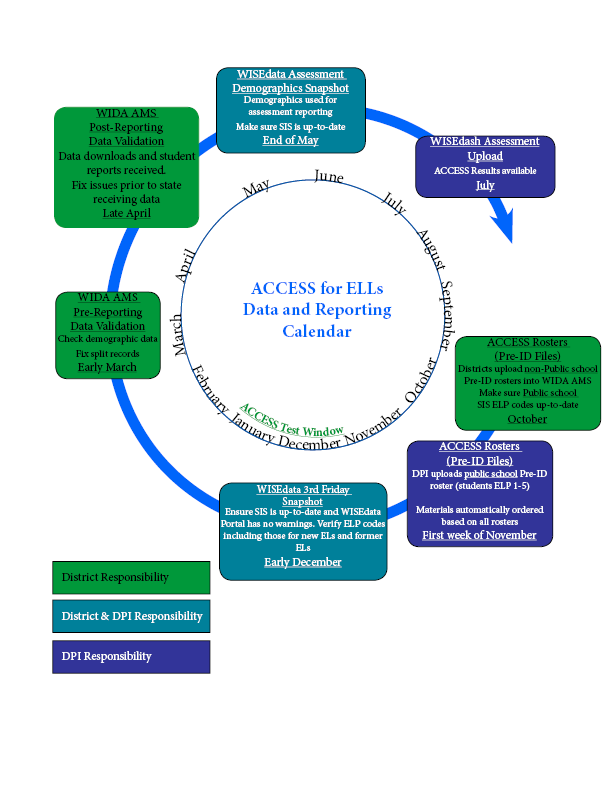 The overall composite score from an ELP Screener is used as one of multiple measures to determine if a student is an EL and should be receiving EL services. See Chapters 2 and 3 in the EL Policy Handbook for more information, including how to translate K W-APT scores into ELP levels.